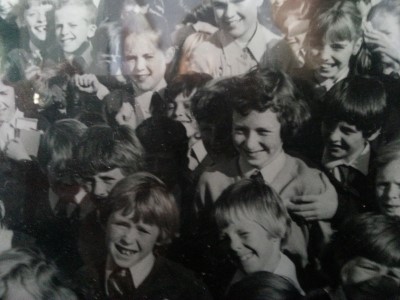 The Parish of Renmore, as we know it today, was established in 1971. Canon Jack O’Connor was its first parish priest and he quickly set about the task of build­ing schools to cater for the rapidly growing population. Scoil Chaitríona Senior enrolled its original 114 girls and boys on 1st July 1974, under its first principal, Mr. Pádraig O’Grady. The other three teachers on the staff were Máire Bn Ní Fhinneagáin, Mrs Maura O’Connor and Mr Mícheál Kitt. As the senior school building was as yet unfinished, the school spent its first year in classrooms belonging to Scoil Chaitríona Junior. On July 1st 1975 the children and their teachers moved into their new school. Mr. Richard Burke T.D., Minister for Education, performed the official opening, and Most Rev. Dr. Michael Browne, Bishop of Galway, blessed the new complex on September 26th, 1975.

The class of 2020 had an alternative end of year celebration. See their school leaver’s song below.

On December 9th 2015 the Choir of Scoil Chaitríona Senior Renmore Galway will perform and release its unique anthem celebrating life in SCS. The co-educational senior school of almost 400 pupils is in its 40th year. The principal and staff are harnessing the talents of pupils, past and present, to perform their School Anthem on the most anticipated night of the year in Renmore Parish, the night of the annual Carol Service. The Carol Service is attended by over 1,200 people each year.

The magical event will be attended by special guest of honour (to be announced in November).

Written and composed by our school choir director Anne Flaherty and Gerry Kennedy, the anthem is positive and affirming and evokes a sense of pride of place.

The 6 track CD features past pupil and upcoming artist Clare Quinn with past pupil Liam Duggan on uileann pipes. The CD will be available to purchase for €6 locally. Songs include; The Anthem of Scoil Chaitríona, Real Love (Sung by past pupil Jennifer Conroy) and Mary’s Boy Child. The CD is being released in partnership with the Connacht Hotel, Renmore. Our principal Mrs Brady has been working hard on making sure that we experience making and recording music and our school is famous for its band and children’s choir who perform at local events in the Hospitals, Galway Hospice and at liturgical events.

We would LOVE if news2day could come and visit us on that day/ night to experience the excitement and report on this exciting whole school event.

Some poems composed by our past pupils

Click here to read poems of our past pupils…!
Page load link
We use cookies on our website to give you the most relevant experience by remembering your preferences and repeat visits. By clicking “Accept All”, you consent to the use of ALL the cookies. You may visit "Cookie Settings" to provide a controlled consent.
Cookie SettingsAccept AllReject AllCookie Policy
Manage consent

This website uses cookies to improve your experience while you navigate through the website. Out of these, the cookies that are categorized as necessary are stored on your browser as they are essential for the working of basic functionalities of the website. We also use third-party cookies that help us analyze and understand how you use this website. These cookies will be stored in your browser only with your consent. You also have the option to opt-out of these cookies. But opting out of some of these cookies may affect your browsing experience.
Necessary Always Enabled
Necessary cookies are absolutely essential for the website to function properly. These cookies ensure basic functionalities and security features of the website, anonymously.
Functional
Functional cookies help to perform certain functionalities like sharing the content of the website on social media platforms, collect feedbacks, and other third-party features.
Performance
Performance cookies are used to understand and analyze the key performance indexes of the website which helps in delivering a better user experience for the visitors.
Analytics
Analytical cookies are used to understand how visitors interact with the website. These cookies help provide information on metrics the number of visitors, bounce rate, traffic source, etc.
Advertisement
Advertisement cookies are used to provide visitors with relevant ads and marketing campaigns. These cookies track visitors across websites and collect information to provide customized ads.
Others
Other uncategorized cookies are those that are being analyzed and have not been classified into a category as yet.
SAVE & ACCEPT
<script type='text/javascript' id='avada-header-js